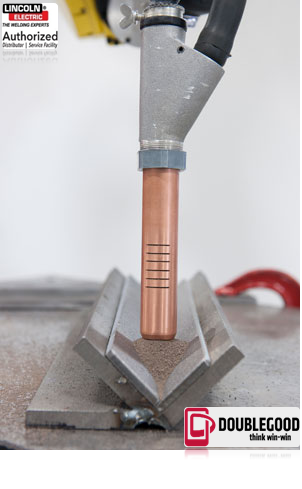 The use of a welding robot for welding fabrication usually employs a solid or metal cored electrode. This is true because of the versatility of the GMAW process – all-position capability, low heat input modes of metal transfer, higher deposition rates and electrode efficiency and an exceptionally low hydrogen weld deposit. The alternatives are generally not viewed as cost effective.

An exception to this typical robotic weld process selection paradigm is submerged arc welding (SAW). It is embraced as a highly efficient welding process because of its ability to deliver sound weld deposits, which are lower in hydrogen and fuse well with parent materials. With certainty, SAW is able to deliver exceptional finished weld mechanical properties. For these reasons, many manufacturers in the ASME welding fabrication portion of the welding market prefer SAW and specify its use at every opportunity.

During a tour of Lincoln Electric Automation in Cleveland, John Susong, CEO and president of East End Welding, Inc. located in Brimfield, Ohio viewed with keen interest the use of the SAW process using a robotic welding arm.

Following the presentation, a lively debate ensued. Susong, who was accompanied to Lincoln Electric by Bob Einfeldt of Praxair Distribution, knew his operations had good reason to investigate the robotic use of SAW. Einfeldt reinforced the idea, and plans for employing the SAW robot welding system at East End Welding were born.

Both Susong and Einfeldt recognized the important role SAW could play in East End’s future. The potential for robotically automated SAW became apparent to Susong as he grew aware of the benefits the submerged arc process provides in power generation fabrication. With this in mind, he began to seek ways to develop uses for SAW in his welding shop.

Susong’s goal was to spend more time on the power generation side of his fabrication business to improve operational efficiency and finished weld quality. The company’s end cap-to-header welding application suited that requirement and was an ideal target for integration of the robotic SAW process.

East End had been using SMAW instead of a higher operator factor welding process. As such, the welding was time consuming. Each end cap required a complete-penetration, multiple-pass weld and had pre-heat and interpass temperature requirements. Also, because of the pieces’ overall length, the header fabrication was prone to awkward over-handling.

If the company were to switch to robotic submerged arc welding, welders could then rotate the torch head instead of rolling the headers during fabrication. Susong was sold, but he also recognized that careful planning was imperative to make this happen. He began to form his team to make the transition to the new robotic process. He knew that there was a risk to this type of investment but was willing to “blaze a trail” because, in the end, he would have a great tool, “that no one else in the world had.” 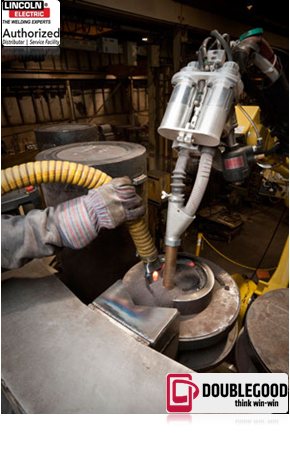 At East End, Susong empowers his team members to approach technology changes head on. From a training standpoint, when the company acquires the most recent advances in machining, cutting, and welding to improve finished product quality and reduce costs, he trusts his team to take advantage of every opportunity to develop the use of new technology. Susong believes that fostering a collaborative relationship between team members and key vendors is central to the successful implementation of the robotic system.

Together, the team worked through the planning for the welding sequence, the issue of controlling heat input and interpass temperature and, finally, the consistent delivery of wire and flux to the weld joint.

Lincoln Electric’s Mate worked through each aspect of the welding operations, and the combined effort of the East End team and Lincoln Automation turned a risk into a complete success, developing an efficient robotic process.

In the process, the end cap-to-header weldment’s root weld and the subsequent hot pass are prepared using GTAW in a manual operation that precedes the use of the SAW robotic welding system. Proper header welding requires the joining of two end caps per unit. Once the SAW weld is complete on one end, the 17-foot header is lifted from tooling and rotated 180 degrees to allow for the welding of the second end cap. Six header assemblies are placed in a unique East End-designed welding fixture that holds each end cap in the flat, 1G, welding position. This innovative fixture allows for robotic welding of the majority of header orders East End receives.

The robot moves from one end cap-to-header weldment to the next, one pass at a time, with up to 20 passes per end cap. This method allows for easier maintenance of the required interpass temperature (less waiting), as well as reduced cleaning of used flux between passes. All of the welding uses AC current for the fill passes and then AC or DC+ for the cap passes. One note: in this highly detailed application, the robotic welding operator has more to plan for and be aware of than is typical for a commercial non-code quality welding robot operation.

The Lincoln Electric Power Wave® AC/DC 1000® SD, as interfaced with the 12.0 foot reach of the FANUC® M-710 robot, features the ability to manipulate how much DC- polarity (higher melt-off rates) is paired with DC+ (deeper penetration). As a result, the use of this feature reduces the risk of blowing through the TIG (GTAW) root and hot pass weld combination with SAW.  The Power Wave® AC/DC 1000® SD also allows the operator to adjust time and current magnitude during each half cycle and the frequency of the AC output. 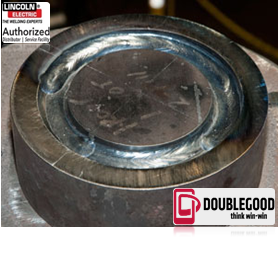 Depending on the wire selected, Lincolnweld® 960 or other Lincolnweld® submerged arc flux is fed through a Lincoln Electric patent-pending pressurized, solenoid controlled, Weld Engineering® flux delivery and recovery system. The flux has a preconditioning temperature of 350°F.

With implementation of this system, finished weld quality improved while the time to make the finished welds diminished. The team’s hard, persistent effort paid off and advanced technology triumphed as the SAW welding system moved East End forward to meet the needs of its customers – efficiently and effectively – now, and into the future.