With more than 70 years of a reliable presence in the industrial sector, Mansfield, Ohio-based  Leppert Machine offers high-quality repair service to its customers. The company’s clientele spans a wide range of industries, everything from printing to plastics to automotive to marine. Though primarily a machine shop, Leppert also has a small welding shop, with three welding stations and a few welders on staff.

In summer 2012, faced with 30-year-old welding machines and an inability to find the necessary replacement parts, Leppert decided that it was time to reevaluate its welding equipment. Pleased with the Lincoln Electric consumable products they had been using in the shop, the welding team called in Ryan Cooper, Technical Sales Representative at Lincoln Electric, to give them an overview of their options. They specifically wanted to hear more about Lincoln Electric’s conventional transformer/rectifier constant voltage (CV) technology models that are updated, but using similar technology to those they were currently using in the shop.

“While the conventional constant voltage MIG welding equipment gets the job done, conventional transformer/rectifier constant voltage equipment is an older technology – it has the same output at all times, meaning that it can’t adapt to accommodate the many variables associated with welding,” Cooper says. “I knew that Lincoln Electric could provide the team at Leppert with more modern equipment that would help them to make their shop more efficient and produce higher quality welds.” 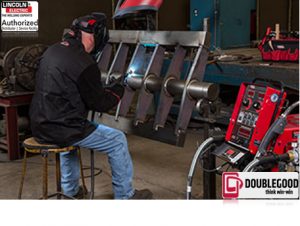 “Unlike constant voltage MIG welders, POWER MIG® 300-level machines are pulse capable, making them more intelligent than constant voltage style welding machines. They are adaptive and can adjust the output of the machine,” says Cooper.  “So, for instance, if a welder is fatigued and inconstant in arc length, the machine gathers feedback from the arc, recognizes the issue and adjusts the output instantaneously, creating a more consistent weld.”

It turned out that Leppert had bought the POWER MIG® 300 for an aluminum welding job many years before and used it only for aluminum projects. They had never considered that they could also apply the POWER MIG®’s technology to steel, a fact that Cooper soon brought to their attention.

To prove that the pulsing and adaptive power source technology would give them better results, Cooper set up a demo, creating the same length welds with two different machines – a constant voltage machine and the POWER MIG® 300.

“The difference in the weld quality between the two machines was like night and day,” says Doug Neel, welder/fabricator at Leppert Machine. “I don’t know why we weren’t using the adaptive power source technology to weld steel all along.” 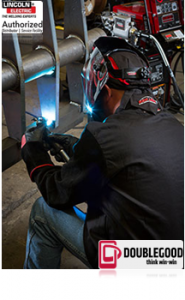 The demonstration soon sparked a discussion about newer technology and the many advantages that an equipment upgrade could have for the shop. It wasn’t long before Leppert was sold on the idea. The company purchased two new machines – Power Wave® S350 and Power Wave® S500 advanced process welding power sources – as well as starting to put their POWER MIG®300 into regular use.

Leppert’s welders also are saving time with the new machines. The company used the new machines to change the welding process from gas-shield flux-cored wire to welding with solid MIG wire. The change reduced clean up time between passes and reduced fume generation in the shop environment.

Plus, the new equipment is multi-process, meaning there’s no need to switch machines when changing between MIG, TIG and stick welding. And, the equipment has a memory panel, allowing welders to switch between different saved procedure settings for repeating jobs quickly and easily.

Needless to say, Leppert Machine’s welders are sticking with their new technology.

“Lincoln Electric completely opened our eyes to a new way of welding, and helped us create a modern, more efficient shop,” Neel says. “I’ve been welding for 35 years, and it’s so exciting to be challenged and learn something new. I’m like a kid with a new toy.”